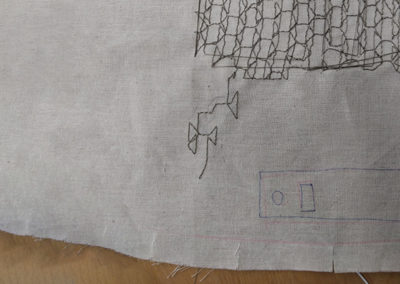 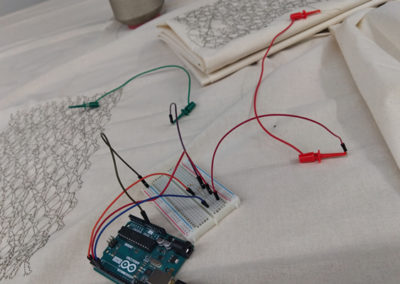 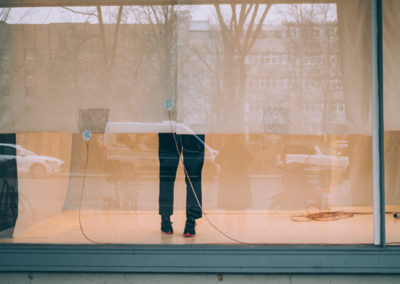 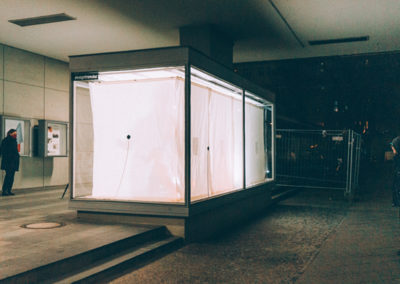 “If something looms over you, it appears as a large or unclear shape, often in a frightening way.”
Definition of ’loom‘, Collins Dictionary.

The experience of being with others, of proximity, of social spaces has undergone sudden, intense shifts. Public life suddenly saw us with our faces concealed and physical proximity put on hold until further notice. Our exchanges often occurred in mediated environments with most of our bodies left out of sight, and the spaces around each of us filtered, blurred, or entirely concealed and replaced with arbitrary imagery of non-places.

Deep into a long period of increased uncertainty, we faced the need to learn new ways of being and expressing ourselves. The material and the immaterial are constantly intertwined, our senses adapt and learn to perceive the concealed, to see through the medium, to touch without touching.

While we’re moving closer, something is drawing near.

“Looming over” is a performative interactive installation housed in the Vitrine of the designtransfer gallery at Universität der Künste Berlin at Einsteinufer 43. The enclosed space of the Vitrine is concealed by large pieces of fabric. Embroidered sensors create electromagnetic fields that react to proximity and touch. A performer moves inside this isolated yet public space, activating sound and light by means of body movement and physical presence. The large glass surface of the Vitrine itself becomes the medium through which sounds and vibrations are transmitted. Bystanders and passers-by are invited to get closer.