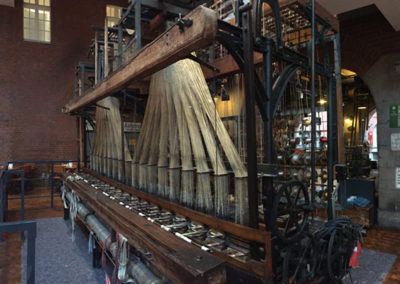 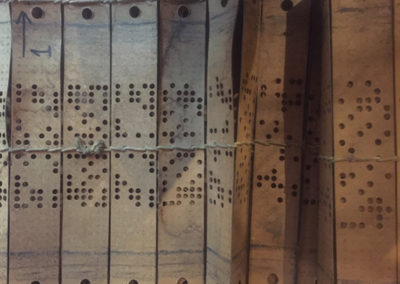 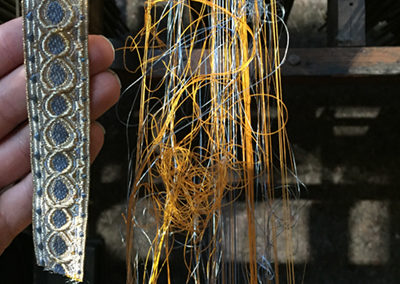 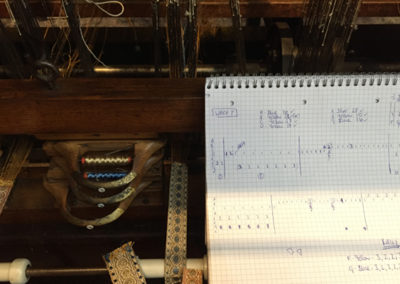 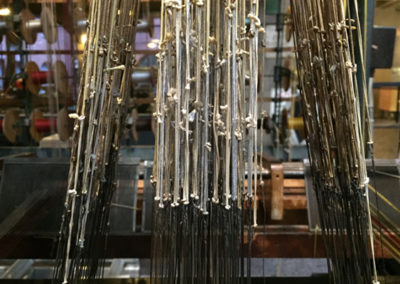 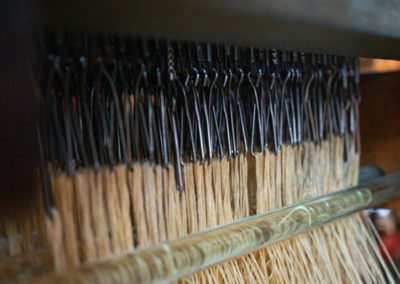 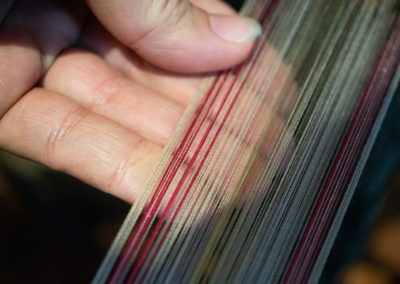 This ongoing project began in 2016 when I was approached by the German Museum of Technology (DTM) to ask if I could restore their ribbon Jacquard from 1920 that had fallen into disrepair. Sitting directly in the main entrance hall of the museum, the loom makes a powerful impression upon visitors and it used to run regularly for demonstrations. Unfortunately the couple responsible for the Jacquard had gotten too elderly to continue caring for it, and the loom had not been touched for roughly 8 years.

This goal of getting the loom back in working condition (and being able to do regular demonstrations once more) represented a whole new challenge for me and a chance to delve into the mechanics of weaving, which is something I had long wanted to do.

To help manage the workload this restoration required, I partnered with another weaver, Birgit Zehlike and engineer Nael Alkhteb, and we carried out the first phase together. The following repairs and ongoing maintenance of the Jacquard have all been carried out solely by myself.

Before beginning any work on the Jacquard, the first step was to take some time to understand all the elements and how they worked. The loom is a dual-mechanism Jacquard, allowing it to weave two sets of punchcards simultaneously, with each mechanism controlling up to nine ribbon warps. The warps used a weighted tension system, which allows multiple warp spools of differing fibre and yarn count to have the same tension and advance around the front beam at an equal pace. Not all available eighteen warps were threaded, and damage to some of the spools would result in being able to make only seven warps operative.

With no manual or guide to work from, much of the initial restoration process came down mainly to common sense and educated guesses. The only resources available were old samples of ribbon and the original punchcards, most of which were damaged beyond repair. Using these resources, it was possible to reverse-engineer the threading of the Jacquard and to recreate the punchcard pattern. Since it hadn’t been possible to find a punchcard cutter in the correct size, the punchcards were digitalised and new the cards were laser-cut locally.

These initial repairs were enough to fulfil the initial brief of restoring the Jacquard to an operative condition, yet this remains an ongoing project. Since the first restoration phase, I have carried out multiple other repairs, including replacing the harness cords, repairing damaged brakes and adding two new warps, bringing the total number of ribbons in production up to nine.

Each set of repairs brings the Jacquard into a better and better working state, and troubleshooting  becomes faster and more efficient as I learn. The ribbon Jacquard has been the most technically challenging project that I have had the good fortune to work on, and I continue to see how the specific store of knowledge I am building benefits my other work.