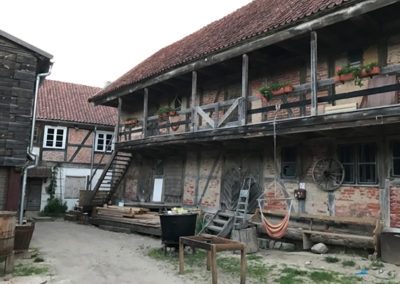 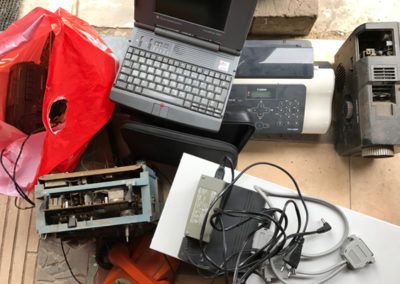 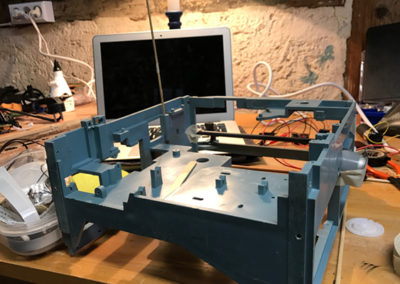 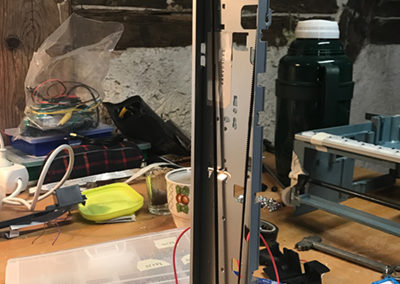 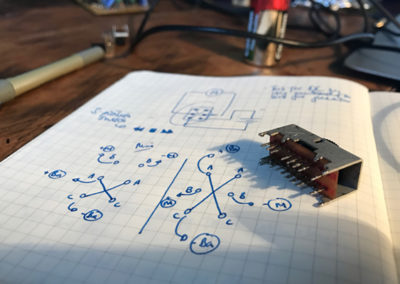 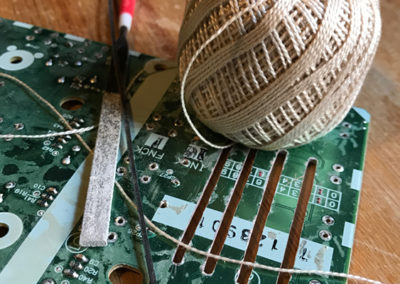 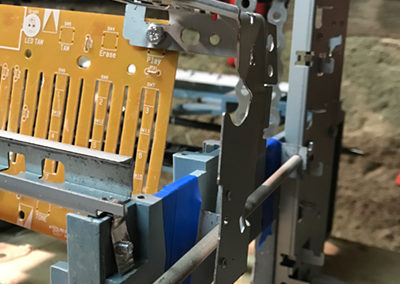 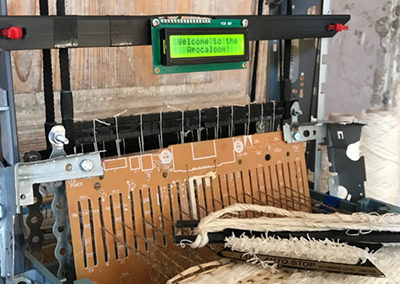 “Apocaloom!” was the result of a one-month artist residency at the Interdisciplinary Art Group SERDE in Latvia, carried out in collaboration with artist Kati Hyyppä. The project, entitled “Post-Apocalyptic Weaving” intended to examine the dichotomy of electronics and sustainability, and to explore ways these seemingly opposing fields could not only sit in harmony with one another, but actively support each other. “Post-Apocalyptic Weaving” envisioned a dystopian near-future where humanity finds itself engulfed by electronic trash. This e-waste can be repurposed to create functioning looms, with the result of using waste to create.

Kati & I had agreed to work concurrently to each develop our own looms using e-trash donated by local residents, believing this would be the most effective was to show the varied results we thought were possible, whilst also allowing each of our personalities to be represented in the final outcome. The incredible variety in e-trash gave us plenty to work with, and with the selection ranging from 1990s laptops to Soviet radios, it was clear these looms would have stand-out personalities.

This project also presented a very specific challenge in that it was my first time really working with Arduino technology, outside of small practice tests done in my studio. Add to this the need to dust off some (very) ancient GCSE physics knowledge, and the result was a rather shaky start – something akin to Bambi learning to walk.

This meant progress felt slow to begin with, and much of the first weeks involved simply dismantling the old electronics, getting to grips with the various components, and doing very basic small tests to make sure I understood how they worked. At times it was frustrating that I wasn’t able to immediately “re-imagine” these electronics as looms, and I did begin to become concerned about my ability to deliver the completed e-trash loom that had been promised in the project proposal.

Despite these concerns, the environment provided by SERDE proved to be incredibly important in the eventual successful outcome of the residency. By both living and working in a creative communal atmosphere, I was allowed to become completely immersed in the project and to take the time to develop my own process. The broad range of materials and tools readily available meant nothing felt limited, and the collaborative energy of the residency space (along with the creative partnership with Kati) meant there was a consistent flow of reflection and development.

The result was that the slow start and initial experimentations paid off. Whilst progress in the first weeks felt achingly slow, the final weeks progressed very quickly. What had felt like a false start proved to be very valuable, as I developed confidence in the understanding of the technology I was working with. Additionally, all the time spent physically handling the various e-trash components gave me time to connect with them on a tactile level. Once it was time to finally construct the loom, I had so much familiarity with them that it was simple to envision their repurposing. The final resulting “Apocaloom!” was made from a fax machine, an AM/FM radio, a cassete player, a printer and small components (i.e. switches) sourced from a nearby scrapyard.

By the end of the residency, both Kati & I had created what we set out to achieve: two post-apocalyptic looms made from donated e-trash.  The looms remain in residency at SERDE, where they can continue to be used to generate both cloth and curiosity for local residents and future guests.

There were, however, additional personal successes. Working with the entirely new medium of electronics was more challenging than I had anticipated, but the knowledge and skills gained (I’m now pretty mean with a soldering iron) continue to encourage my exploration of the intersection of electronics and weaving, and to seek out new collaborations that will further these developments. It is this combination of these achievements over the course of the residency make the “Apocaloom!” one of my favourite projects to date.